The Contracts table holds all contract records. It also controls the associated automation and notifications related to contracts. Part of a representative record is shown below. 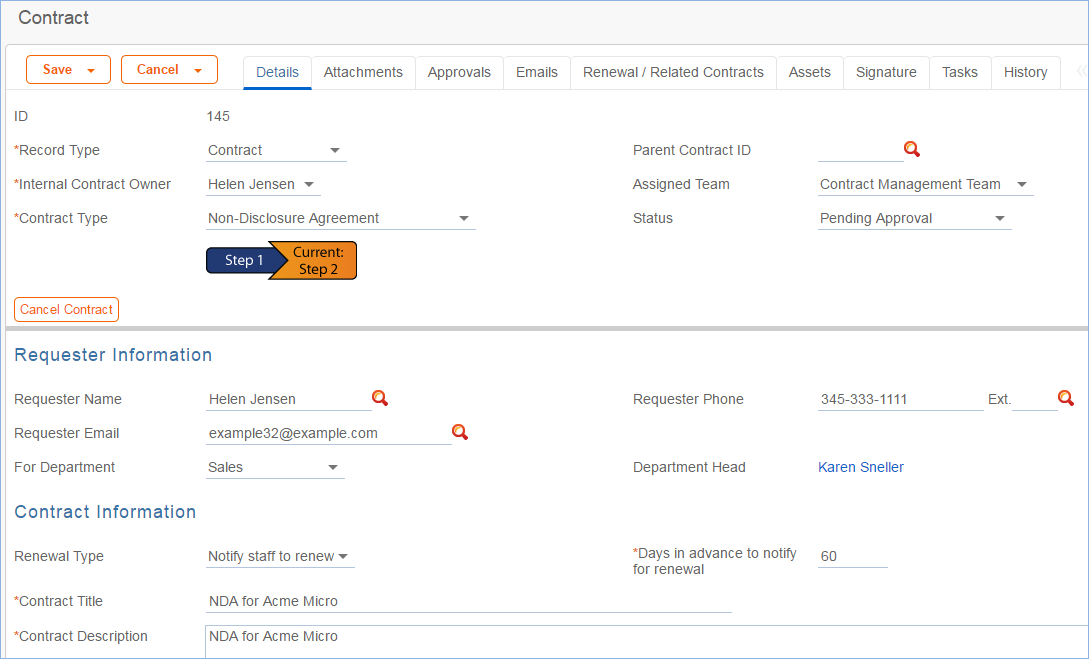 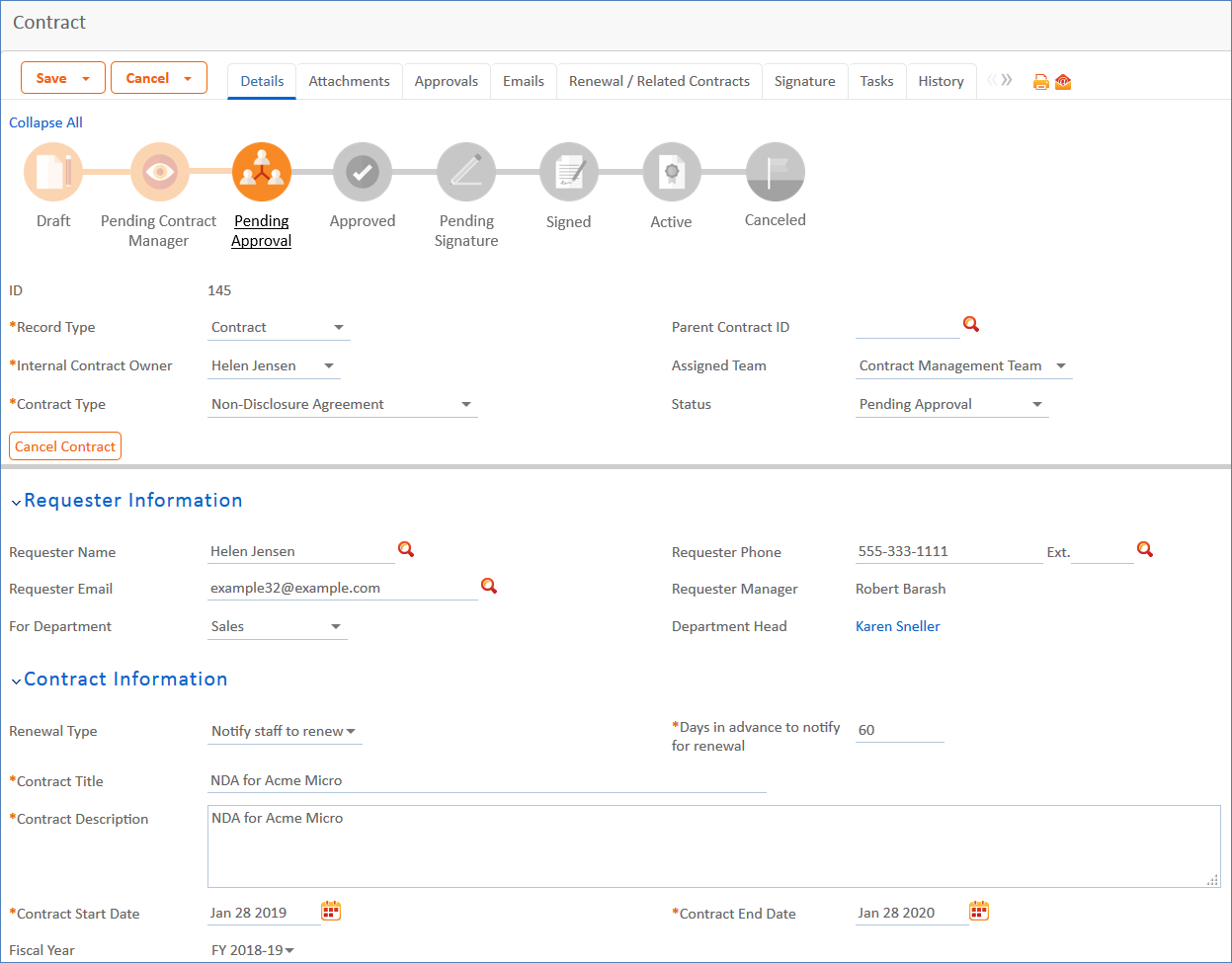 The Record Type field in the common area indicates the contract's category. "Contract" is the default Record Type for newly created contracts. It can be used to indicate either a stand-alone contract or a contract that exists under a master agreement. In the latter case, the Parent Contract ID can be filled in upon creation of the contract. Subcontracts and Amendments will be linked to a parent contract automatically, if they are created by clicking the Create Related Contract button in the parent contract record.

The Select Files drop-down on the action bar is used to operate on multiple selected attachments to update the fields to the far right in the table view.  Add or Remove for the Approval Packet sets the Include in Approval Packet field to Yes or No.  Add or Remove for the E-sign Packet changes the To Be eSigned field to yes or no.  And Set Status to Superseded sets the status for the selected attachment(s) to Superseded.

Insurance certificates can be found directly in the Insurance Certificates table, and in related tables in both the Company, Contracts, and Contracts Company Documents tables. 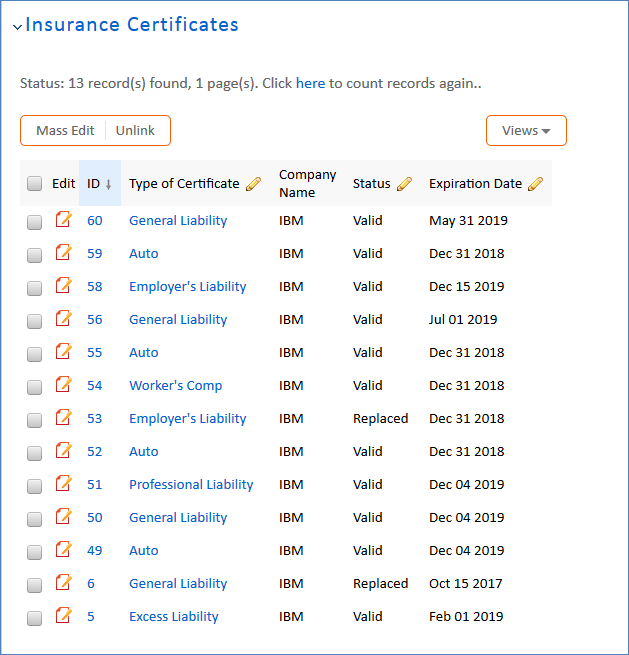 When you add an insurance certificate to a company record, it can be automatically linked to all pending or active contracts with that vendor by a daily time-based rule (disabled by default).

The Insurance Certificate Owner (defined in the company record) is notified fourteen days before an insurance certificate's Expiration Date. When a certificate expires without being renewed, the Contract Managers of any related active contracts are notified on the date of the expiration.

Another method for managing insurance certificates

The system automatically notifies the first approver in the sequence. A progress bar also appears in the common area to provide a quick visual reference of the approval process.

Image Removed
To advance the contract workflow, an approver will use one of three action buttons to change the Status of the approval record: 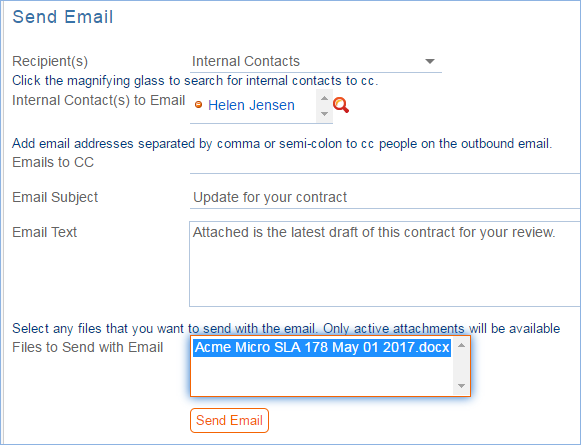 Any direct children of the current contract are shown in the table in the Related Contracts and Amendments section.

Assets can be linked to individual contracts from the Assets tab. Assets must be added separately to the Assets table before they are available to attach to contracts.  If you are not relating assets to contracts, you can simply remove this tab and its fields from the layout.

A Signature tab appears to the right of the Assets Renewal / Related Contracts tab. This tab contains fields for contract document signers, and contains all fields related to DocuSign and Adobe Sign.  If you are not using either system, these fields can simply be removed from the layout. The Files to Sign field holds attached files from the Attachments table that have a To Be eSigned value of Yes. The Refresh Files action button refreshes this field in case changes to the attachments were made in the same session under the contract's Attachments tab.

This will create an Adobe Sign Envelope and convert the signers into recipients.

To cancel a contract, click the Cancel Contract button in the common area. Additionally, users Users of the Admin group can also manually change the contract status Status to Canceled.

Once the Status of the contract is Pending Signature, a Mark as Signed button appears. 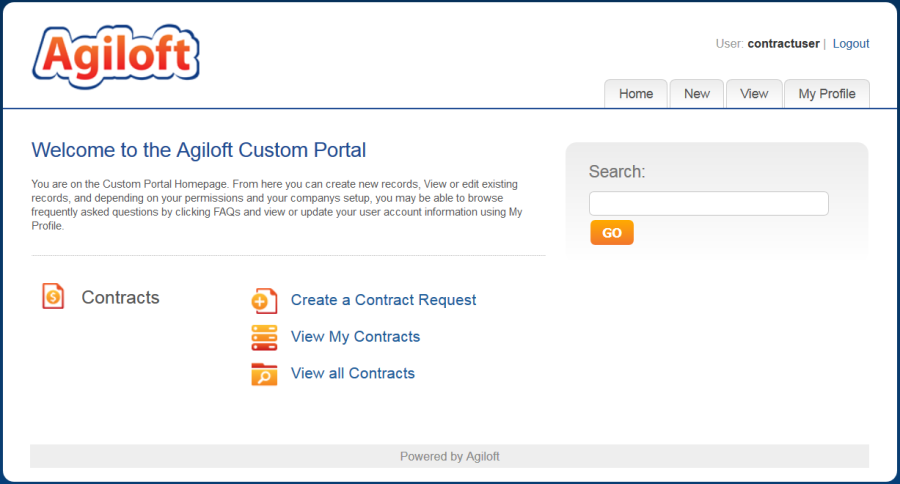 Users in the Contract Creator group may create contracts by clicking the Create a Contract Request link on the home page or by selecting New > Contract from the menu. A simplified contract form is presented to the end user. Many of the fields are hidden from the layout or restricted by field-level permissions. 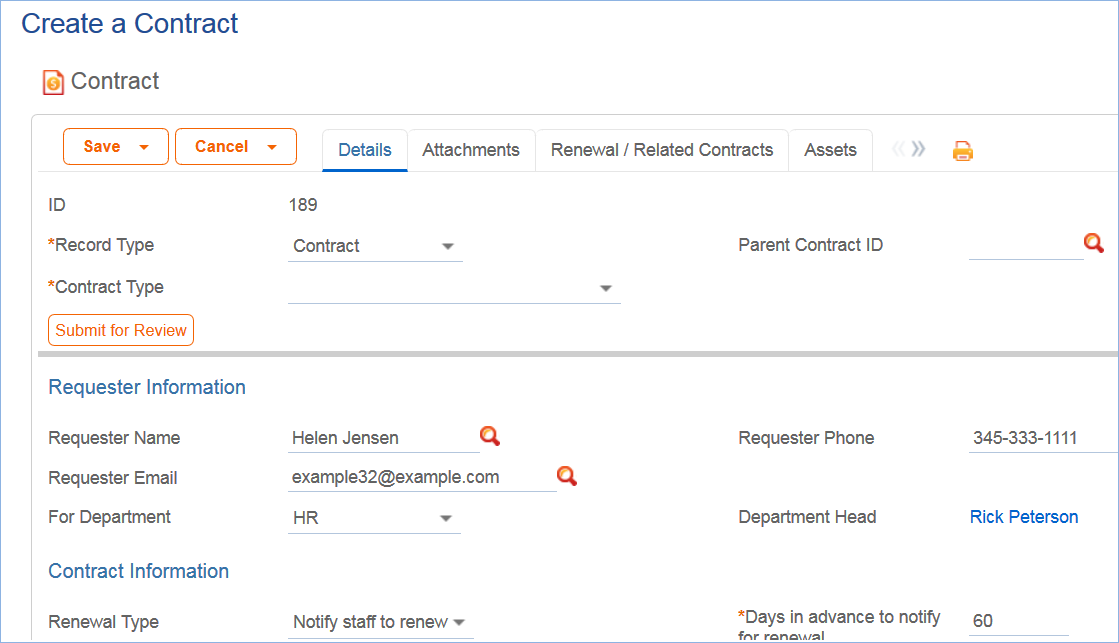 In the Contract Party Information section, users can find and link to an existing company and contact, or create new ones as needed. Select New Company and then enter the name and address information. After the contract is submitted for review, Contract Managers can confirm the new company to finish adding a record. Similarly, end users can suggest a new company contact by filling out the fields in the Party Main Contact section of the form.

At any time, the contract requester can view contracts they previously submitted by choosing View > My Contracts from the menu or by clicking on the View My Contracts link. Contract Creator group members can edit select fields in contracts they own. Certain fields such as Contract Amount, Contract Start Date, and Contract End Date (among others) are not editable by the contract requester if the contract's Status is Pending Approval, Approved, Signed, Active, Renewed, or Expired. This is to prevent changes to currently active or in process contracts. 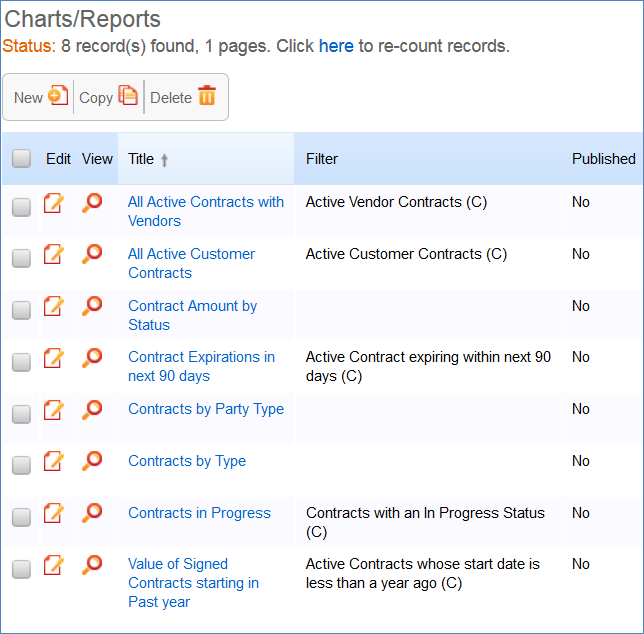 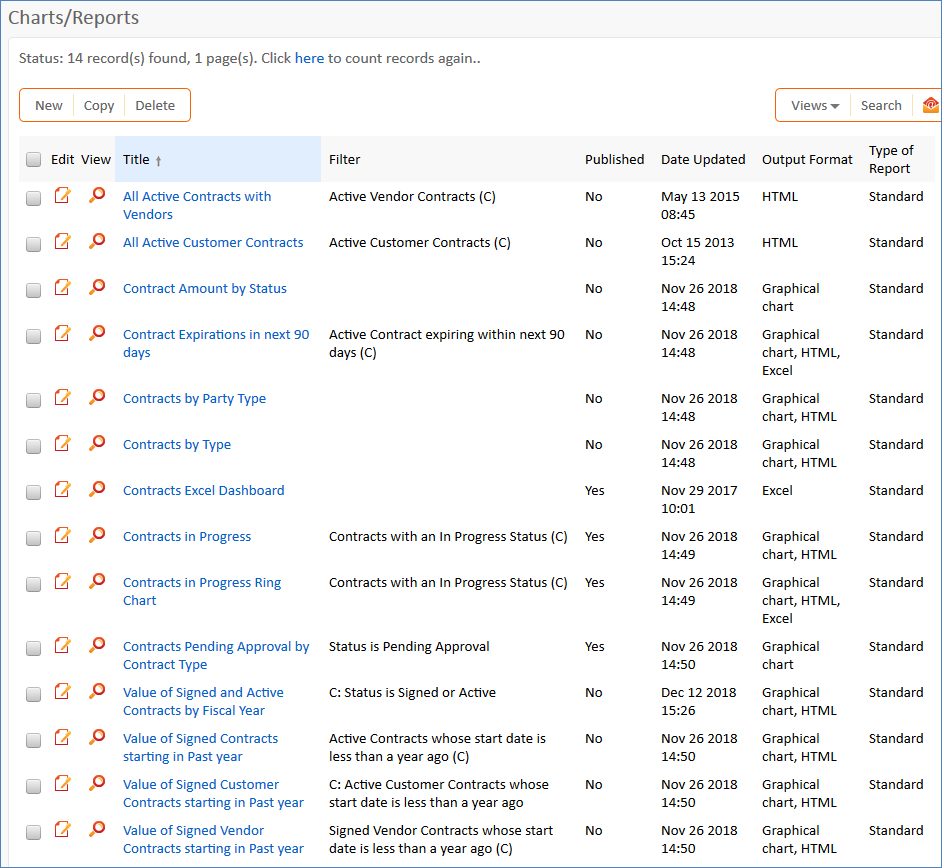