You are viewing an old version of this page. View the current version.

The  Agiloft installation package includes everything necessary for installation on 64-bit Windows and Linux servers, including a web-server and a MySQL database if you do not have one installed already. Installation, upgrades and uninstallation are all managed through the installer wizard.

The  Agiloft installation process consists of two stages: initial installation and setup. During initial installation you will run the downloaded executable file, and the installer will ask basic questions, like where to install the software. Next, run the  Agiloft configuration utility called Setup to complete setup and installation. The setup utility is accessed via a web browser, and can be run at any time after installation to manage web server settings, backups, mail settings and other functions.

The installation bundle includes a servlet container. This is a specialized web server for providing the dynamic web pages that make up the Agiloft interface. This servlet container is usually installed on port 8080 and will not interfere with the regular web server. The installer can automatically configure web servers such as Apache to redirect Agiloft traffic to another port on the container. This allows Agiloft to be accessed by users on port 80, just like the rest of the website.

It is possible to install  Agiloft under Windows with IIS7, for example on Windows 2008 Server. The installer will find the working IIS7 and automatically integrate with it.

Please visit our system requirements page for the most detailed, up-to-date information.

The recommended minimum hardware should have at least 2 processors, a 64-bit operating system and a minimum of 12 GB of RAM and RAID 10 hard drives. The software will not run with less than 4 GB of RAM.

If your instance of Agiloft is integrated with an IIS web server rather than Nginx, you might need to download the Tomcat extension (“isapi_redirect.dll”) that is best suited for your operating system and replace the one that is currently installed at c:\Agiloft\iis\isapi_redirect.dll with one of the following:-

By default  Agiloft is installed in these locations:

After installation, the knowledgebase can be accessed at http://<server-name>.com/gui2, with the username: admin and the password saved in the C:\EnterpriseWizardConfig.xml file in Windows and /etc/EnterpriseWizardConfig.xml in Linux with the following syntax: <ewimpexAdminConsolePassword>PASSWORD</ewimpexAdminConsolePassword>. This password should be changed immediately.

The release version of the current  Agiloft server can be found from Help > About Agiloft, in the knowledgebase or the admin console. 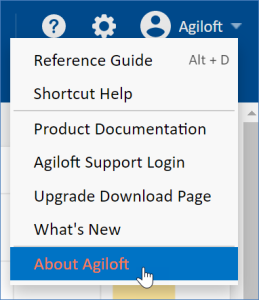 The dialog that opens will have wording similar to the following:

The release version can also be identified from the name of the  Agiloft installer file. For instance:

The key parts of the file name or release version name are the first three numbers: