The Documents table can be used to manage the creation and publication of documents of various types, from marketing collateral to employee procedure manuals. A light-weight parallel publication approval process is included.

Examples of documents that can be included: FAQs, official memos, company policy/procedure, marketing collateral, user manuals, newsletters, press releases, and so on. The Documents table can be used to manage documents that are:

Access to documents is controlled through permissions that are based on a choice field within the Document record.

The following sections contain information on how end users and technicians can submit Document records, as well as how the Document Management team processes submitted records. Document records are generally created in a default status of Draft. After supplying the required information and uploading a document, the user clicks the Submit for Review button to begin the review process. The status of the record will be updated to Pending Document Manager, and the contact information fields are automatically populated based on the details in the user's record. If the user is not prepared to submit the record immediately, they can save the record until they are ready to make further updates. When a user submits a record, they are referred to as the Submitter. Both end users and power users can submit records:

The Requires Approval field on the Progress tab determines whether approvals are needed before publication.

If the document requires approvals by document Approvers, the Document Manager selects them by adding approver names under the Potential Reviewers heading on the Progress tab. This field is a link to a single field, called Full Name, with multiple values enabled in the Employee table. It is displayed as a multiple value box with a pop-up selection list, which is filtered to only list people on the Document Reviewers Team. 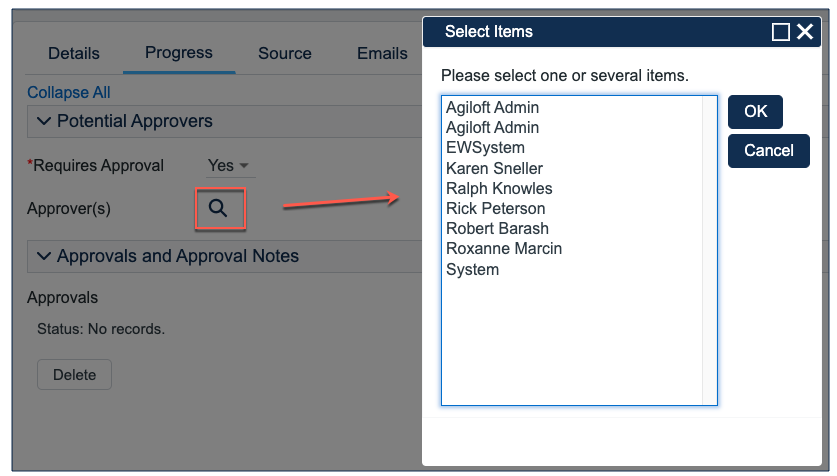 The Approver can approve, require changes, or reject the document. If an Approver requires changes or rejects a document, they are required to provide Approval Notes.

Once all approvals are completed, and the value of the field Total Number Still Awaiting Approval is 0, a rule sets the Status of the document to Ready for Publication. Both the Submitter and Document Manager are emailed that the document is ready for publication.

The Document Manager can then attach the final approved document to the Published Files field, and updates the Status to Published. A validation rule checks again to see if there are still any pending approvals. Once the Document is published, an email notification is sent to the Submitter. 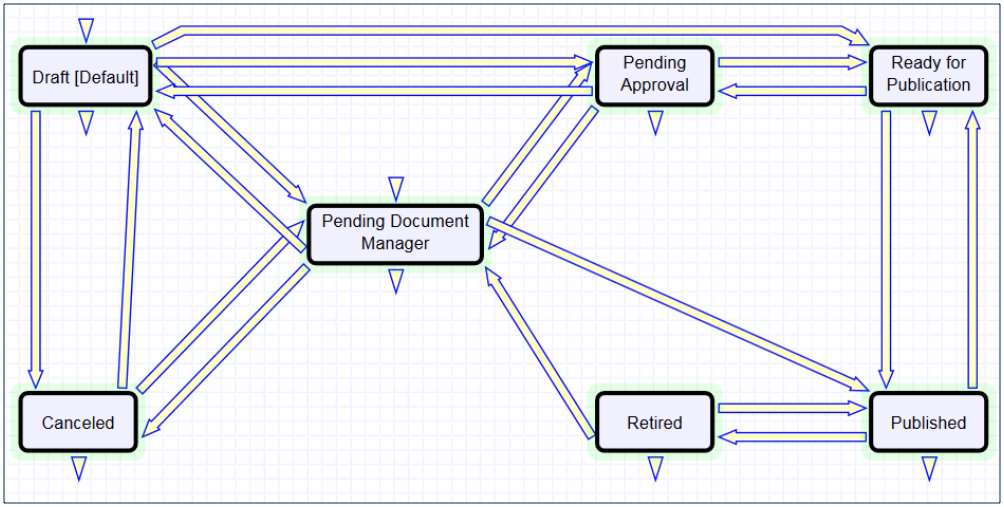 Document records are owned by the creator. Specifically, a record is owned by the user whose Login matches the Creator Login field.