To ensure the security of  Agiloft and the server it runs on, you should take the following steps:

Users should not be assigned privileges they do not need or do not have the skills to use safely. For example, a user with the ability to delete all records in a table in one operation can do considerable unintentional damage if they are not familiar enough with  Agiloft's architecture.  Only trusted and trained users should be placed in the Admin group, as that group can make drastic changes to the structure and data of your system.

Use SSL and HTTPS

When accessed as a SaaS service, Agiloft is available through HTTPS access only. If you install it on your own server, we strongly recommend that you also make it available over HTTPS, even if it is being used behind the firewall. This protects information transferred over the network from being accessed by a malicious individual.

Even if you must allow access to some accounts through standard HTTP, ensure that HTTPS is used to access more sensitive accounts such as those in the Admin group or with login access to the  Admin Console.

A root user on Unix/Linux or a user in the Administrators group in Windows can circumvent  Agiloft internal security by modifying program and data files or directly changing data in the database, including passwords. However, even an unprivileged user can circumvent security by using local web access to exploit some of the special debugging features of  Agiloft such as the JMX console, as shown below, that are not accessible to connections from outside the server. 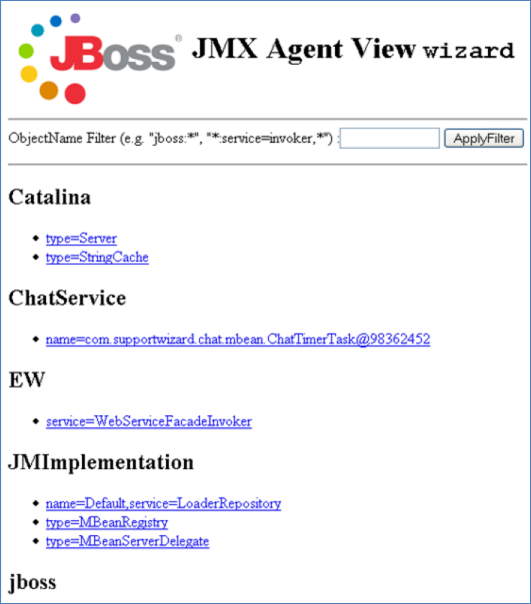 Treat the  Agiloft server as you would any other sensitive server by only allowing connections essential for  Agiloft operation, such as HTTP and HTTPS, and administration, such as SSH for Unix/Linux, or Terminal Services for Windows. Additional services or applications which run on the same server machine, including other web applications, may potentially contain security holes which could lead to the compromise of  Agiloft data.

These are the TCP ports normally used by  Agiloft: