A workflow is a function that determines the stages that a record passes through in its life cycle, and it also governs which paths are allowed between stages. The various stages that the record can be in, such as Opened, In Testing, or Closed, are referred to as "states." A workflow can include actions that run when one state changes to another state, called a "state transition." State transitions may also trigger rules that run further actions. Workflows can also use conditions and guards that control whether actions run or state transitions occur. For example, a guard may prevent users from changing the state from Open to In Testing unless the Cause of Bug field has a value.

The workflow feature may or may not be used in a given implementation project or on a given table. For instance, the Support Case and Service Request tables in our out-of-the-box solution use workflows, primarily for sending email notifications. However, other tables, especially background tables, may not use workflows at all. In many cases, rules accomplish the same function and are used instead.

Let's look at an example workflow. When a bug report is created in a state of Open, email Engineering. Do not let the record move to In Testing unless the Cause of Bug field has been completed. If the field is empty, run a Validate action that forces the user to complete the field. When the record does move to In Testing, email QA. When the record's state changes to Closed, email the person who submitted it.

This workflow contains the following parts:

Guard: Do not permit a state transition from Open to In Testing if the Cause of Bug field is empty.

The Workflow wizard refers to the drag-and-drop interface found on the Workflow tab of any table wizard. It's primarily used to define the allowed state values for records in the table, such as Open, In Progress, or Completed, as well as the available state transitions from one state to another. When you're using the wizard, make sure to save the workflow when you've finished making changes. Even if the interface appears complete, your changes not saved unless you click Save.

Once you have created and saved a table's workflow, Agiloft automatically creates a wfstate Choice field labeled "Status," containing all the workflow states you defined. This workflow state field appears on the Fields tab of the Table wizard, just like other types of fields, and it behaves like a regular Choice field on the record layout. The field's purpose is to transition a record from one state to the next. When a record is being edited, not all of the state values appear in the field. That’s because the available choices depend on which transitions are allowed in the workflow editor. If the system didn't relabel the field to "Status" automatically, you might want to do it manually.

Older versions of Agiloft rely on a Java applet to open the Workflow editor. If you don't have Java, you are prompted to install it. We recommend upgrading to the latest version of Agiloft to take advantage of the improved DHTML editor.

To begin creating a workflow, use the Workflow wizard to add different states to your workflow.

Imagine you want to create a workflow with the following states: Order Received, Sent to Partner, Updated by Partner, Fulfilled, and Canceled. After you enter the state names and click Add States, the states appear on the interface.

Once you've added workflow states, you can use the interactive interface to modify the states and state transitions.

Change the Field and Search Order of Workflow States

To determine how workflow states appear in the workflow state field and how they're returned by a search, click Reorder and use the arrows to move states. Workflow states above other states in the list take precedence in a search. 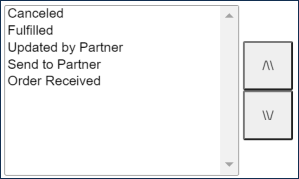 If you search "Workflow State > Updated by Partner," the search only returns records that have a state of Fulfilled or Canceled. Similarly, if you search "Workflow State < Order Received," the search returns no records because no states are "less than" Order Received. Keep this ordering in mind if you create actions or rules that use searches involving the workflow state field.

To configure a workflow state's properties or set the default state, click on a state and select the appropriate checkboxes:

To print a workflow, click Print and choose the device to which you want to print. You can create a PDF or print to a physical printer.

Actions can run when a record is created or deleted in a specific workflow state, or during a state transition.

In most implementations, Validate actions offer more flexibility than guards and achieve the same result. For this reason, Validate and If-Then-Else actions in rules are used more often than workflow guards because rules offer more filtering options to handle more complex conditions. For instance, an error presented to users is more customizable in a Validate action than a workflow guard.

However, if you have a very simple workflow, it might make more sense to use a guard than to create an entirely separate rule.

Simple and Script Conditions and Guards

To add a Simple or Script condition or guard:

The tab contains two columns, each corresponding to a workflow permission setting. Checking the Visible column allows users in the selected group to see on screen the names of the actions, conditions, and guards that are triggered when the record is saved in a new state. If the Optional column is checked, users can deselect the actions and guards before saving the record.

When you've finished configuring your workflow, click Finish to save and apply the changes. No matter how complete the diagram looks, it is not saved until you click Finish. When you navigate back to the Fields tab of the Table wizard, notice the field called Workflow State or wfstate. The choices in the field map to the workflow states you created. In most cases, you should rename this field and add it to the record layout to use the table's workflow.