The Variable Formula data type lets users create queries or formulas that include system variables, with or without operators, to produce a result. The result can provide a direct value or simply resolve to true or false. This result can be used by rules to insert values or determine whether a condition has been met that will result in some action. The field is displayed as an input box and Formula Help button.

Placing conditions in a variable formula field is useful in a few ways:

For some real-world examples, see the Use Cases section below.

Working with variable formula fields requires you be familiar and comfortable with formulas in  Agiloft. For more information about formulas generally, see Formulas.

Constructing a Variable Formula or Query

You can create custom formulas or queries in standard syntax, making use of field variables and the operators shown below. Note that these operators do differ in some cases from operators that can be used in other kinds of formulas. Click Formula Help to access a list of field variables in linked tables that you can use to build variable chains.

The Is Not operator (!) can be placed in front of another condition to negate it, and this is the only way to perform a search for "does not contain." For instance, !($related_to~="Contract") will find records in which the Related To field does not contain "Contract."

The output of a variable formula field can be one of three types:

The Variable Formula field stores a formula, variable chain, or both. A variable chain can be used to find and pull values from other records, populating specified fields with those values. Formulas can be used to find and evaluate records against the conditions defined by the formula. In practice, the field on its own is a passive element in a record, but it can be used in rules or actions, where it can be requested and evaluated, and used as a condition for the rule or action. Two primary examples of usage are in the Approval Template table and the Replacement Variables table of the out-of-the-box system.

This formula evaluates the linked contract record found by $latest_contract_id and checks whether it satisfies two conditions:

Typically, when approvals are to be generated from a contract, the contract manager presses a Route for Approval button that causes a linked record action to push the Contract ID into the Approval templates that are linked to that contract type.

The Approval template is then updated with the Latest Contract ID, which triggers an If-Then-Else rule. The rule checks whether the conditions defined in the Variable Formula field (the Condition field) are true, and if so, runs another action to convert the template into an Approval record:

If the condition is false, no approval is generated.

The Variable Formula field is used in the Replacement Variables table to define a variable chain that pulls values from a linked field relationship for use in other tables. These values are typically used in template records, such as in the Approval Template table or Task Template table. 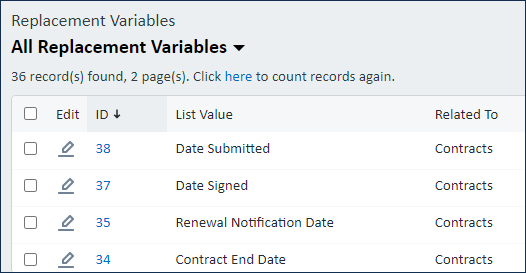 Approval Templates and Task Templates pull in a link to this table so templates can be set up by selecting the replacement value from a drop-down list, such as Contract Owner. When the list value is selected, the variable field is pulled in at the same time.

When an approval or task is generated from a template, it pulls in the variable field from the template, and a creation rule copies the resolved value of the variable into the Approver or Assignee field.

Note that the variable can be arrived at through a chain of relationships, as in the following example:

This is starting from the contract (linked record ID), going to the requester record linked through requester ID, then finding the manager's name within the requester's record.