Teams represent sets of users who share a role or work on projects together. They are often used for sending notifications, assigning records to groups of users, and configuring localization, such as setting working hours and available languages. This makes teams different from groups, which determine the permissions each user has throughout the system. Teams help model your business processes and the company's entire hierarchy or supplier/customer relationships. The system comes preconfigured with several teams, and you can create any number of custom teams.

Team membership is independent of group membership, so several users from one team can belong to different groups and vice-versa. Users may belong to one or several teams, one of which should be set as their primary team.

The primary team determines the user's default interface and Look and Feel scheme, so users need a primary team before they can log in to the system. Team membership also controls how rules and notifications are applied to users. For example, you can schedule an announcement to be delivered to members of a selected team or have an email sent to them in response to some event.

Team membership can be adjusted from a user's record or from the Custom Fields tab of the Teams wizard.

To view, edit, and manage teams in your system, click the Setup gear in the top-right corner and go to Access > Manage Teams. You can also add the Teams table to the navigation menu if you use it a lot. This can be helpful during testing, if you need to make adjustments as you go. If you add the table and it doesn't appear, go to Setup > Tables, click Team, and then click Unhide to unhide the table.

Here, you can mass edit teams, delete multiple teams at once, import and export teams, and perform some other general table functions. 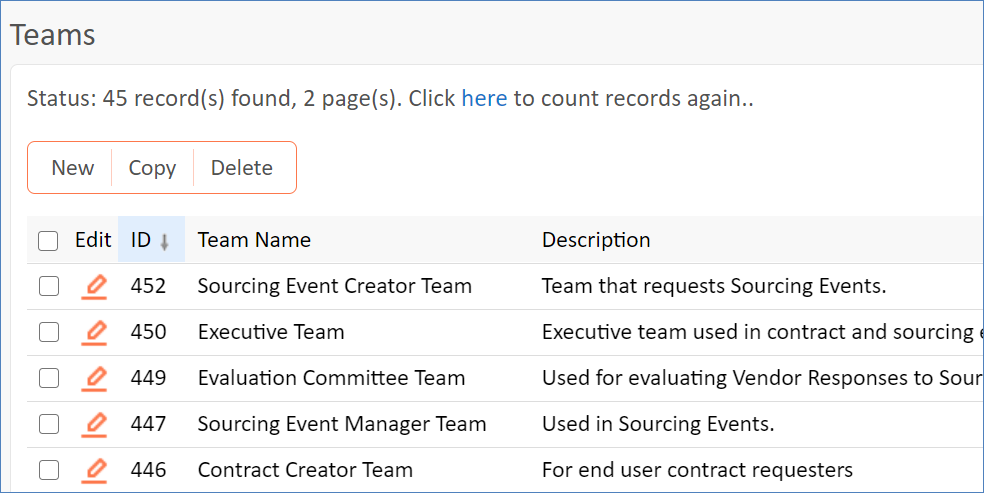 Teams can be deleted from the Teams table, but users need to be reassigned to another team if the deleted team is their primary team. When practical, rename rather than delete unused default teams to avoid being asked to unlink data dependent on the team.

Changing Fields in the Teams Table

The Teams table has some hard-coded fields, such as language and working hours, so some of its configuration settings are not editable. In the Table wizard for this table, you can only edit and add new fields to the General tab. Any fields you create are placed on this tab. These fields are also the only ones that support mass edit, import, and export.