A rule is a statement of automated logic that the system executes to perform an action. For example, these are some typical rules:

Rules are triggered by different conditions, and these conditions are highly customizable. For example, one rule might email the contract manager whenever someone creates a new contract. In contrast, another rule might delete thousands of old support cases and runs only once every 30 days during non-working hours.

You can choose which records a rule operates on with a saved search. This focuses the rule so it only processes relevant records. For example, instead of running a data validation rule on every record in the table, you might run it only on records where the relevant data was updated.

Agiloft uses three different types of rules. These rules are categorized by how they are triggered in the system. There are event-specific rules, time-based rules, and summary condition rules. 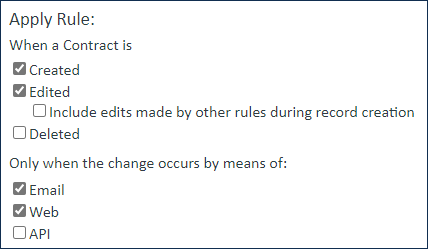 The "Only when the change occurs by means of:" section is used to limit the system interactions that cause the rule to run.

Time-based rules are triggered at specified time intervals, such as every four hours, once a day, or every Monday. They're often used for automating escalations and notifications, as well as scheduling resource-intensive actions like imports during non-business hours. Consider these time-based rules:

If an error occurs during a time-based rule, an email is automatically sent to members of the admin team and any child teams.

Summary condition rules are the only rule type that actually requires a saved search during configuration.

By default, only one time-based or summary condition rule is allowed to run in a knowledgebase at any one time. If you host Agiloft on your own server, you can modify this by customizing the Max Timer Rules per KB global variable.

Rules are created and edited with the Rules wizard. To access the Rules wizard, click Setup [Table] on the left pane and click the Rules tab. In the list of rules, click New to create a new rule, or click the edit icon next to an existing rule. Alternatively, you can access all the rules in your system by clicking the Setup gear in the top-right corner going to Rules.

Use the General tab to configure basic settings for the rule, such as the rule's name and how the rule generates history entries.

Select the rule type here. The remaining tabs of the Rules wizard differ based on the selection made here.

Select the type of rule:

By default, you're notified before running a rule that matches more than 100,000 records. If you choose to run such a rule, it only affects the first 100,000 matching records. You can change this behavior at the admin console or KB level by setting new values for the following global variables:

This concludes the Condition tab section for event-specific rules. Feel free to skip ahead to the Schedule tab if you do not require information on time-based or summary condition rules.

This concludes the Condition tab section for event-specific rules. Feel free to skip ahead to the Schedule tab if you do not require information on summary condition rules.

Use the Schedule tab to set when the rule is active and its order of priority relative to other rules in the table. All rule types include both the Rule is Active and Priority sections. Time-based and summary condition rules have extra sections called Apply the Rule and Start Time, which are used to determine time intervals. Summary condition rules have a unique section called Frequency.

For example, suppose you have a rule that runs an Update Fields action to change the status of a record from Closed to Reopened if the Additional Information field is updated. Let's say you also want to run a Validate action that notifies the user that they can call a support line if the priority is Critical when the status changes to Reopened. If you don’t place these actions in separate rules, the system won't recognize the change to Reopened, and the Validate action won't run, even if the record's priority is Critical.

It's a good idea to put all Validate actions in a rule that runs before any others. This prevents other actions from making changes before any validations can run.

When you save a record and trigger rules, various system actions occur in a regimented order. For example, rules that are executed in correlation to their priority order is one such system action. It's important to know when a rule runs, relative to other system actions. This allows you to better anticipate how the system behaves when a user saves a record.

When a record is saved, system actions are executed in this order:

Interactions between rules, priority order, and order of execution are important variables to consider when you design rules. Rules can overlap, invalidate one another, trigger other rules, run on incorrect values, and cause other problems if you don't consider these factors during the design process. To solve existing issues with rules, consider checking out Troubleshooting Rules.

Usually, it's better to disable a rule instead of deleting it, in case you need the rule in the future. If you're configuring rules in a system that is not yet live, it's also a good idea to disable time-based rules until the system goes live.

To disable a rule: