Data conversion is one of the most useful automation tools in Agiloft. Conversion allows administrators to map fields from one table to another, creating new records or updating existing records in the process. For example, a Contract record could be converted into a Company record after a new contract is created and the company becomes a client. 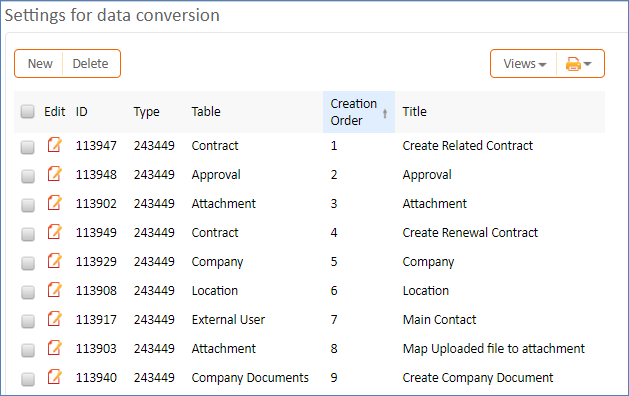 Conversion can be used in many different ways, and each setup is a little different, but it's usually a good idea to follow these best practices:

You can convert the same record into a target table in multiple ways, at different times, and with different field mappings.

Use Table tab to set a few primary options for the conversion mapping.

On the Field Mapping tab, choose the fields from the current table that you want to map onto fields in the target table.

The Options tab includes a variety of settings for the conversion.

Two permission options on the Record Permissions tab of the Table Permissions wizard control these aspects of data conversion:

When using the Convert button on the action bar, the Conversion Dialog is always displayed before completing the conversion, even if the "Allow interaction with conversion rules" checkbox is cleared.

If the "Allow interaction with conversion rules" checkbox is selected in the Table Permissions wizard, the user can interact with Data Conversion actions based on the selected conversion option. However, if the user doesn't have permission to create records in the target table and the "Interactively, showing the new record page" option is selected, the user cannot save the record and complete the conversion.

If the "Allow interaction with conversion rules" checkbox is cleared, then the following logic is applied when running a Data Conversion action, based on the option selected for running the conversion: