Creating Records from a Process Table

Creating Records from a Process Table

This article discusses options for designing an interface to create records from a process table. When you have linked fields in a process table record, users typically want the option to create a new record in the other table without leaving the current record. For instance, a user might want to create a new Asset related to a Service Request record they're working on. Several approaches can accomplish this:

The best approach depends on a variety of factors, which we'll cover in the rest of this article.

Linked Field with a Search Icon

Any linked field with a search icon allows users to create records in another table, provided the user has permission to create records in that table. This is the easiest and quickest solution to implement, but it doesn't offer some of the useful functionality of other approaches. When users create new records this way, they typically select the record after creating it to populate other fields in the parent record.

New Button in a Related Table 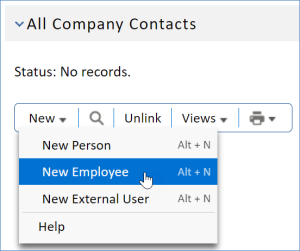 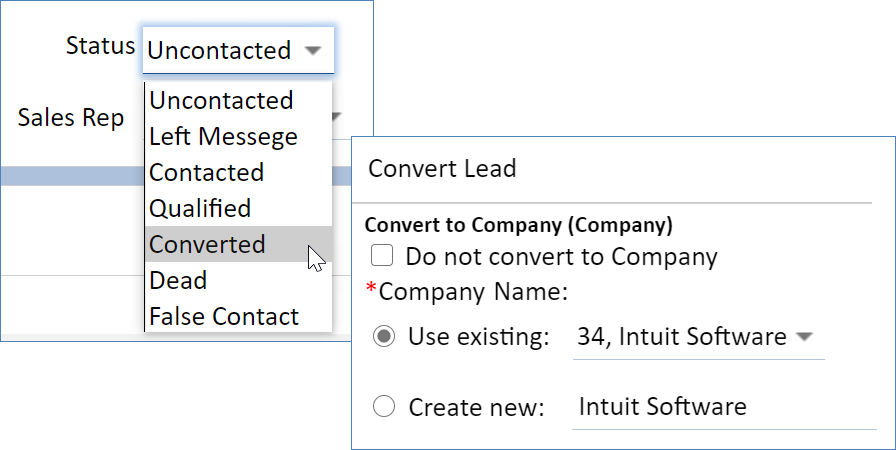 Like an interactive conversion, a silent conversion using a rule allows users to automatically create new records by triggering a rule that contains a Data Conversion action. The difference is that silent conversions create new records without any user intervention or confirmation. Users can trigger the system to create records this way even if the user doesn't have permission to create records in the target table.

When you create a silent conversion using a rule, users might not even know that a new record has been created, unless they're admins who are familiar with the system's configuration. To prevent any unintended consequences with usability, keep this in mind when you use this option.

Conversion using an action button is one of the most user-friendly options, but it can take significantly longer to build than the other approaches. The best configuration of this approach requires you to spend time creating a set of duplicate fields to hold the information for the new record. However, if you incorporate this approach in a design that's carefully thought out, the result is a system that's extremely intuitive for users and unlikely to result in errors.

When you're implementing a system, think about its requirements to determine which approach is best for your situation. You might need to balance competing needs when making your choice. Use the following questions as a guide to help you with your decision.

Review these sample scenarios to see how each approach has been used in real-life situations.

Linked Field with a Search Icon: Choosing a Requester in a Contract

In the Contracts table, all contracts typically have a requester. The requester information includes fields for the Requester Name, Requester Email, and others, which are part of a linked set to the People table. Notice the lookup display icon next to the fields.

When the user clicks the lookup display icon, a search window for the People table opens. The user can select an existing individual from here and populate the fields in the contract with that individual's information, or they can use the drop-down menu to create a new user record in the People table.

If the table has subtables, which the People table does, the user needs to be trained to select the correct table when they create the record. If they select the External User subtable but the requester is really an Employee, it can create problems with data organization and retrieval.

After the user selects a table, a new record form in that table opens. The user can then enter information for the new person and save the record. If the record has validation errors, such as required fields that are incomplete, the system does not allow the user to save and create the record until the validation error is corrected.

After the user creates the new record, it appears in the search window so that the user can select it and populate the linked fields in the contract with the record's data.

The user must manually select the newly created record to populate the linked fields; the system does not do this automatically.

Related Table with a New Button: Adding a Problem from a Change Request

Records in the Change Requests table have a Related Records tab that contains several Related Tables, each of which displays records in other tables that are related to the current change request. One of those Related Tables displays records from the Problems table. When users click New, the system opens a new record form in that table.

When the record form opens, the only field values included from the change request are those fields that create the linked relationship necessary for the Related Table. In this case, that's two fields: Change Request ID and Change Summary. The user must manually complete the other fields. If there are validation issues, the system prevents the record from being saved and the user must correct the errors. 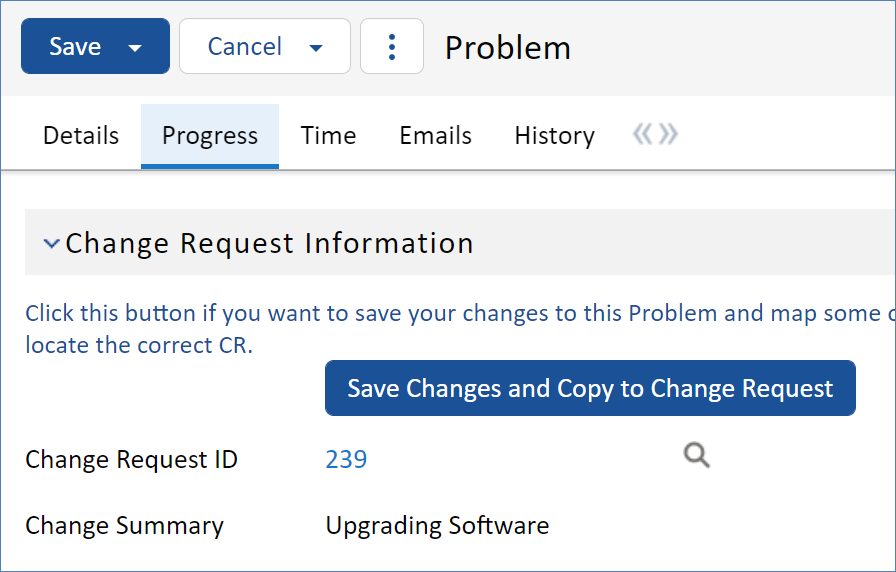 Once the user saves the record, the record is created in the Problems table, and it appears in the Related Table in the change request.

Interactive Conversion Using a Rule: Converting a Lead into a Company, Location, Opportunity, and Person

Lead records have a Status field that's used to convert leads into Company, Location, Opportunity, and Person records. When a salesperson expects a possible sale, they convert the lead to reflect that possibility. They do this by selecting the Converted status and saving the Lead record, which triggers a rule that runs a Data Conversion action.

The records are converted when the user clicks Convert. If a required field is left blank, the system prompts the user to enter a value before the conversion runs. 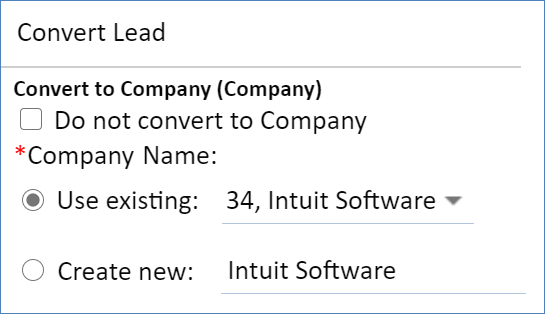 A screen with the conversion results appears after the conversion is completed. The screen lists all the records that were created, or whether an existing record was updated based on a matching value.

If a validation fails—for example, because a field that requires a unique value has a duplicate value—the conversion for that record is cancelled and reported on this screen. To create a record that failed to convert, the user must restart the conversion with a different value for the invalid field.

Assuming that all the conversions succeed, a new record is created for each conversion mapping contained in the Data Conversion action. In this example, that means new Person, Opportunity, Company, and Location records are created, which are also linked to one another.

Silent Conversion Using a Rule: Converting a Contract into an Attachment

When a Contract record is updated by email and the email includes attached files, the files are automatically placed in the Transitional Contract Files field. This is possible because of two settings in the inbound email configuration for the Contracts table.  These settings are accessible by going to Setup > Email and SMS > Configure Inbound Email, editing the Contract table's configuration, and selecting the Email Updates tab. 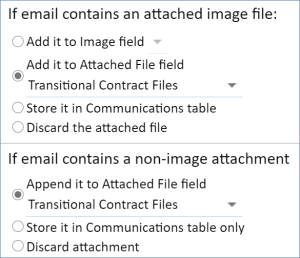 A rule in the Contracts table is set to run whenever the Transitional Contract Files field has changed and contains a value. The rule also contains two actions. The first action contains the Data Conversion action that creates the Attachment record and maps the relevant fields. The second action removes the file from the Transitional Contract Files field so that other updates don't create records with that same file appended.

When the rule creates the new Attachment record, the user is not shown any confirmation or dialog because the update came from an email, regardless of the conversion setting. In this case, it's not important that the user is notified because they don't need to make changes to the record or otherwise interact with it at this time.

Conversion Using an Action Button: Creating a New Company and Location from a Contract

All records in the Contracts table are associated with a company. Records in the table use the Contract Party Entry field to determine whether the user searches for an existing company or creates a new company. The Contract Party Entry field is a Choice field that uses radio buttons and has two choices, with Existing Company selected by default. This leads the user to search for an existing company before attempting to create a new one.

If the user wants to create a new company, they select the New Company option, which hides the linked fields and displays several local, visibility dependent fields used for the conversion. After the user enters the required information, they click Create Company to create records in the Company and Location tables.

In this case, records are created in the Company and Locations table without any user intervention or confirmation. The newly created company is then automatically selected in the current Contract record, and the linked fields are populated with the information the user entered when creating the company.

This conversion using an action button contains many moving parts that might not be immediately apparent. The approach can seem complex when we discuss how it works, but it's attractive because it allows users to create records in multiple tables that are linked to the current record, and it leaves little to no room for user error. It's also intuitive and allows users to create the new records completely from within the current record, without any new dialog prompts or windows.

The conversion is configured to match on the Company Name field in the Company record. This means that if someone creates a company that already exists based on a matching name, the existing record is updated instead of a duplicate being created. In the Location table, duplicate records are prevented with the Company / Location field, which requires a unique value and is a compound field of the Company Name and Location Name fields. If a user enters an existing company and an existing city, the conversion is prevented due to a uniqueness requirement error.

Along with the details supplied in the local fields already shown, the conversion also maps the contract's ID into a Contract Source ID field in both the Company and Location records. This allows the system to establish a link from the new records to the contract. This is also a field that a rule uses, which we'll discuss in a section below.

If the user clicks the action button and tries to create a company that already exists but the location is new, the new location is added to the existing company's record in a Related Table.

The action button runs two more actions. The next is the conversion itself, which maps the fields from the Contract record to the fields in the Company and Location records defined in the conversion mapping. Lastly, it removes the values from the New Company fields in the Contract record and resets the radio button to the default value of Existing Company. 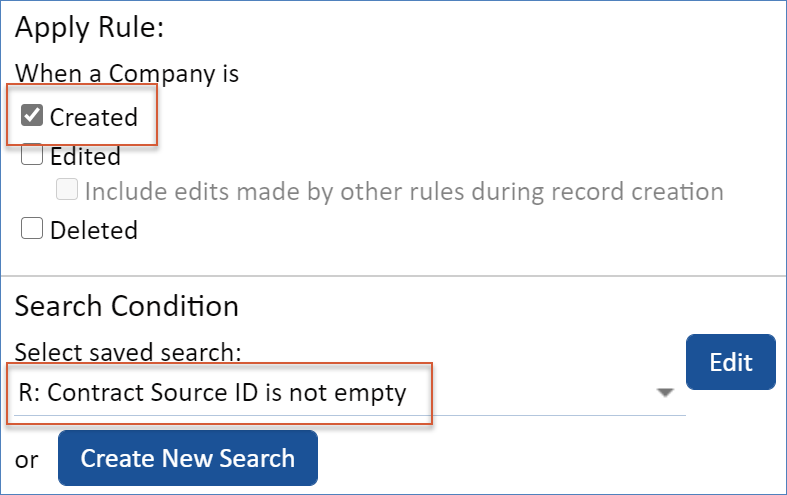