This article is based on a design specification from an actual customer project in Agiloft.

The customer KB should be able to compile and product a blank contract file from a clause library based on a number of parameters such as the selected contract type in the contract and solicitation records. The user only needs to set the metadata in the record correctly, then click the Generate Blank Contract button. The system then assembles the contract file and gives a browser pop-up once the contract generation is complete. The total assembly process takes about 30-40 seconds.

There are four tables needed for the design:

In addition, the following Excel sheets and scripts can be used to import clauses and clean Word formatting from clause text:

The first differentiator is the contract type. Each contract type has a pool of clauses it can use, stored in the CTC table. When the system generates the blank contracts, it is checking the CTC records instead of the CL records based on the selected Contract Type in the SOL record.

CTC records can have one of three types of CTC records:

Each CTC record must belong to one of the three types above.

The second layer of differentiation between CTC records is based on the metadata in the Solicitation record.

Each CTC record has a Sequence value. The Sequence defines the workflow and so must be unique for a specific Contract Type. For example, for Contract TypeA, we cannot have two CTC records with "Sequence = 1". Instead, we can make one CTC sequence "1.0", and the other sequence "1.1".

The sections below will help with managing certain aspects of the clause library system design.

Dynamic numbering of the contract articles can be set up by the system, to a limited degree. For this, you will need to store the clause text differently than how it appears in the contract. For example, a contract contains clause numbering as below: 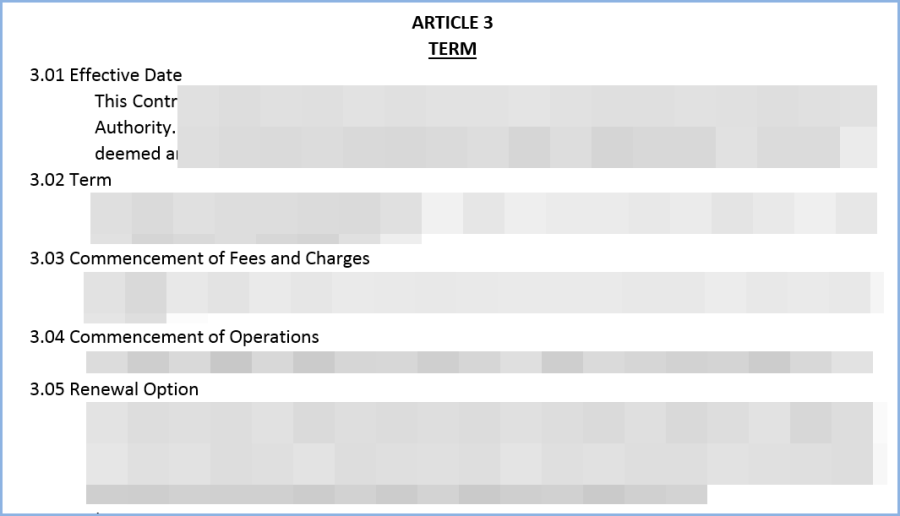 All the "3"s in the text can by dynamically numbered, so that if the section is generated as the fourth section in the contract, it will display "Article 4", and "4.01 Effective Date".
To set up this capability, when storing the clause into the system just need to replace the heading numbers with _num, so the data stored in the Clause Library looks like:

Update Existing Clauses for all Contract Types in the Clause Library

To update the language in an existing clause, go to the Clause Library table and edit the target record.  This process must be done manually and one at a time, because attempting to update clauses using Excel will cause Word formatting to be lost.

Customize a Clause for a Specific Contract Type

For a specific article (clause), each contract type can hold a different version of a clause.

Add a new Clause to the Clause Library

If we have new articles (clauses) you want to add into the system, you firstly need to create the Clause Library record for it. There are two ways of creating background clauses:

There are two ways of generating the CTC records:

If you need to generate a large amount of CTC records - i.e, when you create a new Contract Type - you can use an Excel spreadsheet to create multiple records via import. Please pay attention to all the steps in this section.
You can use this Contract Type Clause import template.xlsx file for the import.

To reactivate an inactive clause, change the Status value to Active. Note that associated inactive CTCs will not be reactivated automatically.

To remove a CTC record, change the Status to Inactive. The CTC will not be included in future blank contracts, but nothing else will be affected.

Specification - Set Up and Update

This section contains implementation steps for common tasks relating to setting up and updating items, with the actions or rules that happen in each step and the purpose for each.

Note: the Sequence column should be viewed as a numbered list.

Clause Library - change the clause text of an existing record

Entry Point: Modify the Clause field in CL record and click Save.

Entry Point: Modify the Status field in CL record and click Save.

Entry Point: Edit the Clause field or Change Related CL and click Save.

Entry Point: Change Status or Sequence field and click Save.

Entry Point: Create a new CTC record and click Save.

Entry Point: import a list of CTC records from Excel.

This section contains a description of the tables, fields and rules that were used in this design.

The Clause Library table is the major background table holding all the clauses for the customer.

The rules and actions are listed below:

The Contract Type table creates a list of contract types which each contain a selection of available clauses from the Clause Library.

The Contract Type table contains a rule and several actions which are described here.

This search has the following filters and sorting order:

For a specific contract type, the sequence must be unique, so if you have two different clauses with the same sequence but different versions, you also need to make sure the sequence is different. It can be something like 3.1 and 3.2. When generating the contract, the system works like the following:

In addition, there are three types of CTC:

For CTC type 3, in the Solicitation record there is a field called Conditional Clause to Include. This field holds all the CTCs that are related to the same Contract Type with Conditional and User Picks, and the user picks the ones they would like to include.

When generating the CTC, the system checks whether the Condition meets, or if the conditional clause is included in the field in Solicitation. If either of them is true, it generates the clause.

Below are the rules and actions included in the Contract Type Clauses table:

Edit: Generation of the Blank Contract in Solicitation

The Solicitation table is the main processing table where contracts are generated from the the clauses.

Below are the rules, actions and action buttons included in the Solicitation table: